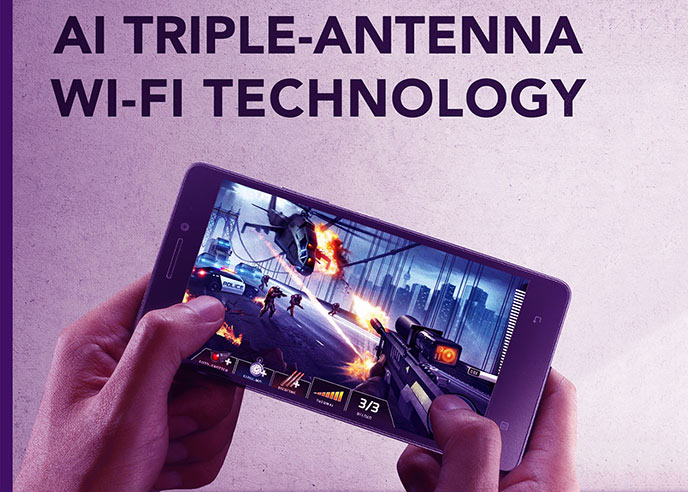 Have you ever lost a game because your Wi-Fi suddenly cut out? The betrayal is hurtful, but that's just how it is, and you feel your hands are tied because you can’t do anything about it.

Well, actually there's more to it than just a flaky network. Another culprit often goes unnoticed -- it's simply how you hold your phone.

Try holding your phone in landscape position like you're going to play a game. Look at where your hands are. Your index fingers are wrapped around the top of the frame, while your ring or little fingers support the bottom, right? Unfortunately, your hands are covering exactly where the Wi-Fi antennas are traditionally placed in a phone, effectively blocking your phone's Wi-Fi reception. The phenomenon has a nickname too, and it’s called “The Death Grip.”

The good news is, HONOR engineers have discovered this issue early on and began research to find a viable solution! After performing countless user tests and experimentation, they finally came up with “AI Triple-Antenna Wi-Fi.” HONOR View20 is the first phone to use this technology, and that’s what makes it the best android smartphone that you can get your hands on today, especially if you are an expert game lover!

Since the problem is caused by users blocking the antennas with their hands, HONOR engineers started by figuring out how users hold their phones. They analyzed and combined the data from over 10,000 users to create thermal maps of users’ grip for both portrait and landscape mode. The darker the spot on the map, the stronger the grip on that part of the phone, meaning more interference with your Wi-Fi signal.

By looking at the first figure (portrait), you can see the entire top part of the phone is Red, meaning there is no interference. This works perfectly for the earliest phone designs where the antennas were placed at the top as there was no need for you to hold your phone horizontally.

Now look at what happens when you turn it sideways to play a game or stream a video. Even with dual antennas, both are blocked.
HONOR engineers quickly realized they needed to think outside of the box. Their solution was to place an additional square antenna in the center.

Adding another antenna may sound elementary -- I mean it makes sense that adding more would mean that you have more chances at better reception. There's no way you could accidently cover them all with your hands. Well, that's not quite how it works. They need to be strategically placed, because signals are easily affected by the metal in the device. Not only do they need to avoid the dark spots on the maps but the pesky metal hardware inside as well. After heavy analysis, thousands of experiments and prototyping, the engineers created the most efficient design, equipped in HONOR View20.

However, breaking out of “The Death Grip” takes more than just an upgraded hardware. An algorithm is used to determine the most optimal antenna combination at all times you are using your phone and switches between them accordingly. If there are too many antennas, more computing needs to be done, and there is the potential of your phone switching between the antennas too often, slowing your Wi-Fi down even more.

This is where HONOR View20 takes full advantage of the new Kirin 980 Dual-NPU' AI computation abilities, creating an entire set of algorithms just for handling the triple antennas.

Here's an idea of how it works. The system is automatically activated when you use your phone in landscape mode, then it calculates which combination of antennas has the best reception. Once it detects the signal weakening for the two main antennas (top and bottom), it enables the third antenna to boost the signal. This isn't merely a mechanical switch. In the event when router Wi-Fi signal is weak, switching antennas on HONOR View20 can make your connection worse and reduce battery life unnecessarily. Luckily, HONOR View20's AI is able to determine the cause of the weakened signal and decide how to keep you happily connected! This is what makes it the best game smartphone you can own for the uninterrupted pleasure of your gaming experience all the time, every time!

But that’s just part of the package and there’s more that’s going to catch your eyes! HONOR View20 is also equipped with the all new 48MP Ultra Clarity mode, a TOF 3D Camera, and a world leading Liquid Cooling System! Pretty hard to beat, right!?