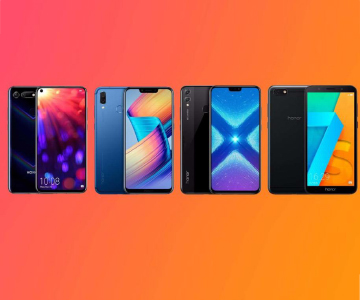 HONOR launched as a sub-brand of Chinese manufacturer HUAWEI in 2014 - but it's quickly become a brand to be reckoned with. Good value for money, good build quality and some of the latest hardware combines in these handsets.

There are a wide range of numbers and letters, with models changing frequently, but don't panic we've done the hard work for you. Here we have HONOR's complete current line-up of phones, available in the UK, so you can pick the best model for you.

Which is the best HONOR phone?

Rather than making you read the whole thing, we're putting the conclusions at the start, so you can instantly see what's what.

The HONOR View20 is the big flagship device, succeeding the HONOR View10. It's priced very competitively against other flagships, whilst offering a great design, camera prowess and core power with a massive display.
The HONOR 10 is smaller and more affordable than the View20 but a good choice for those looking for power without spending big.
The HONOR Play is significantly cheaper than the HONOR 10. It is the best affordable phone out there with plenty of power, an accomplished design and an outstanding battery life.
The HONOR 10 Lite further reduces its price compared to the HONOR Play. It too has a great design, this time with a tear-drop display but it offers less RAM and a smaller battery than the Play.
The HONOR 8X sits in-between the HONOR 10 Lite and HONOR Play in terms of price, offering some great cameras features, excellent value for money and a good battery life.
The HONOR 7A is one of two entry-level handsets. It still offers a dual camera and a decent design, but it reduces its power capabilities and the bezels surrounding the display are significantly more prominent than the pricier HONOR handsets.
The HONOR 7S is the cheapest device, coming in at just under £100. It brings a dual-camera and a 5.5-inch 18:9 aspect ratio display but you don't get the power, even if its design doesn't look budget.

All of HONOR's phones offer a build quality that belies the price. There are no plastic handsets here, with HONOR choosing either a premium metal unibody design or glass backs loaded with colour - the latter of which is stunning on HONOR View20 and HONOR 10.

Fingerprint scanners are prevalent, only the HONOR 7S misses out, although the position varies from front or back. The HONOR 10 has a seamless under-glass scanner on the front, while HONOR View20 opts for an in-display scanner.

HONOR uses Micro-USB on HONOR 7A, HONOR 7S and HONOR 8X, while the other devices opt for USB Type-C. Standard 3.5mm headphone sockets are on all the models, but NFC isn't on HONOR 7A and HONOR 7S, meaning no payments on lower-level handsets.

Here are the weights and measurements for reference:

You'll note that all are slim, the HONOR 8X especially, but with 8mm thickness the average. The HONOR 8X is the largest phone overall, the HONOR View20 the best looking.

Then there is the aspect ratio. The HONOR 7 models are both 18:9. The HONOR 10 models, HONOR 8X and HONOR View20 move into 19:9 (or thereabouts) territory. Both ratios give you reduced bezels and more display on the front of your handset thanks to the switch in aspect. Even more so on the new HONOR View20 - this display fills more of the front than all the other phones thanks to the punch hole in-display front camera negating the need for any notch. The HONOR 10 is the sharpest though.

Here's how all the display specs compare:

The largest display is on the HONOR 8X with the HONOR View20 following closely behind. In reality, if it's bang for your buck in the display department, then the HONOR Play is seriously worth consideration.

When it comes to the hardware, most HONOR phones offer microSD storage expansion, which is a good starting point.

There is one Qualcomm phone and one MediaTek device - the HONOR 7A and HONOR 7S respectively. All the other devices use Kirin processors. We've found the Kirin devices to be good, especially at the top end.

Here's how the hardware breaks down, then we'll tell you what it means.

The next tier of devices is occupied by HONOR 8X and HONOR 10 Lite, which broadly have comparable hardware, although the HONOR 8X has a slight bump in RAM and battery. That's also reflected in the price though, so the HONOR 10 Lite is a bit of a bargain as a mid-range device here coming in under the £200 mark.

There's also a punch hole in-display front camera in the HONOR View20, with the flagship rearing its head as something a little different.

The dual camera setup is generally used for depth mapping, with the pairing of a 13 or 16-megapixel main camera with a 2-megapixel sensor. This will allow the HONOR 7S, HONOR 10 Lite and HONOR Play to create better bokeh or portrait effects. The HONOR 8X also fits into this category despite offering a higher resolution main camera.

The HONOR 10 has a more sophisticated arrangement with a main sensor and second monochrome sensor, while the HONOR View20 has a 3D camera with AI. The result is that they can also create those portrait effects, but are much better overall cameras, higher quality, with better low-light performance, so remember that not all dual camera systems are created equal.